Thank you for subscribing to our newsletter! 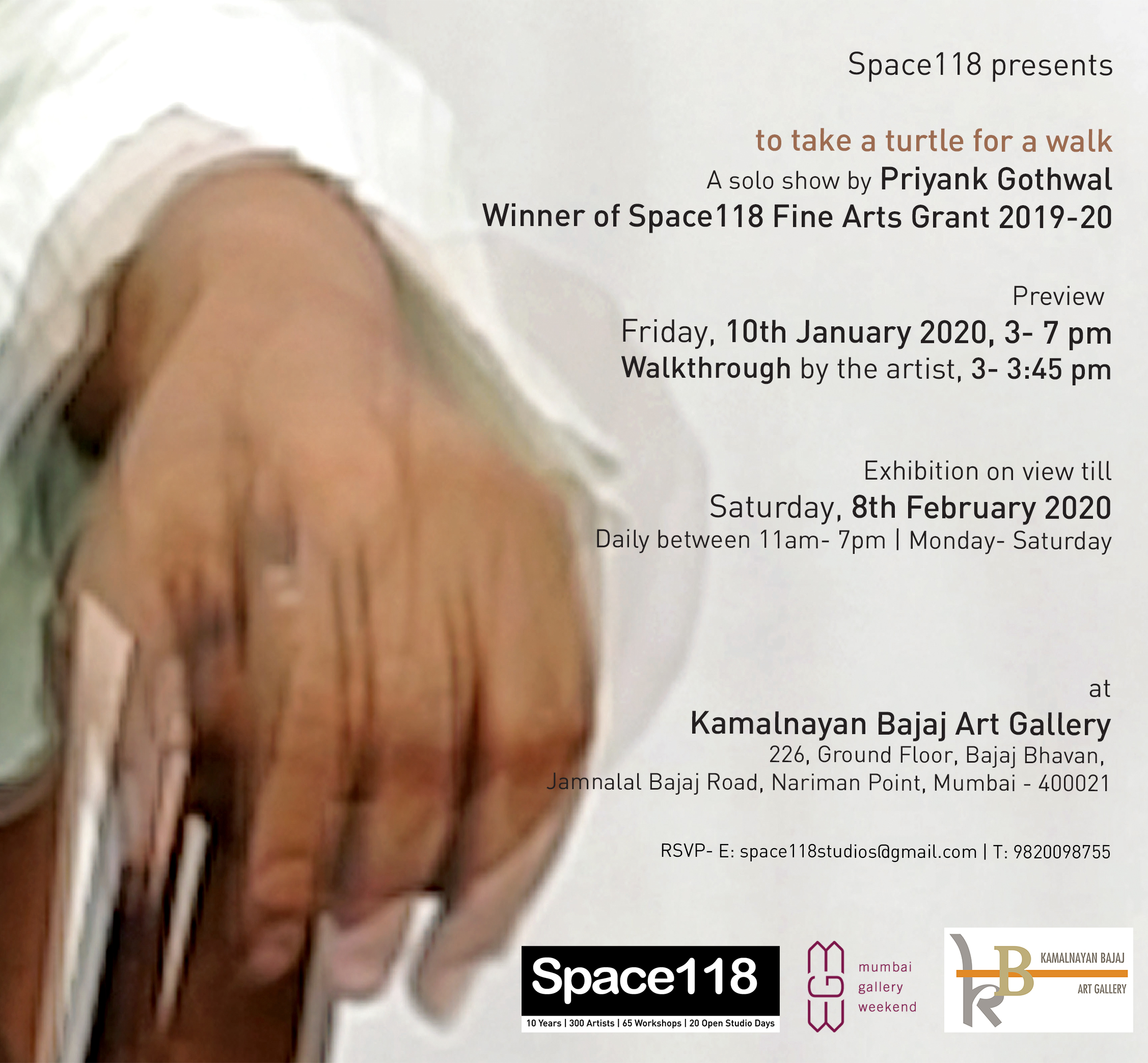 to take a turtle for a walk

Space118 is delighted to present ‘to take a turtle for a walk,’ an exhibition presented by Priyank Gothwal, winner of Space118 Fine Arts Grant 2019-20. The show will preview on 10th January at Kamalnayan Bajaj Art Gallery, from 3pm to 7pm with a walkthrough conducted by the artist between 3pm- 3:45pm.

The idea for this show revolves around the intention to understand the pace of Bombay as a city or altogether to ask if it is possible, at the first place, or not? In addition, how it affects people’s psychology in terms to influence their life’s pace?

As per the research done in 1999 by two cultural psychologists, Robert V Levine and Ara Noranzayan, to understand the pace of life within 31 countries of the world, three indicators of pace of life were observed: average speed of a common person walking within the city, the speed at which a postal clerk completes his/her duty (speed of deliverance of a message) and the accuracy or the deviation of public clocks of the city. The works displayed here, holds these measures and offshoots themselves from these three observed indicators, at first, to understand the pace of life within Bombay and eventually to react against the ever increasing pace of life within cities under the influences of growing consumerism, capitalism and the growth of cultural industries working above cultures to control them. This attempt further poses a complication to understand how movement of time and pace of life affects human psychology in a total incommensurate level which forms or disturbs the community characteristics of a culture.

Walter Benjamin identifies the growing rationalism within the city, exemplified by the allocation of street numbers and accompanied by a general increase in the pace of life. How, he asks, if everything becomes accounted for, could there still be mysteries in the city? ‘to take a turtle for a walk’ therefore could be seen in this context as a protest against both the increased pace of life, and the rationalism of Taylorist clock time.

The show, on other hand, also shifts the focus from one commensurable, international clock Time and its hegemony over cultures, to hint towards the infra ordinary moments of life highlighted by each steps of a walking turtle, light of twelve noon entering through the door within the room, the ever suspension of time to reflect upon the meaning of a message received, and towards the places of forgotten, missed clocks and cemetery showing the faces of real time.

Priyank Gothwal’s practice entails the exploration of lens-based mediums, precisely involving both stills and moving images. It revolves around the Idea and experience of Time and its effects over spaces and beings. The Idea of Time and its reading further opens up in his works to its political, historical, philosophical and psychological levels in various ways.

Priyank has done his Masters in Fine Arts from Shiv Nadar University in 2017. He has been an Inlaks Fine Art award recipient in 2018 and is part of few self-initiated programs like First draft (group pop up exhibition at alternative places), Out of line (Mobile phone based, automated call, virtual show). He has displayed in the open studios and has been part of the residencies like Theertha art residency in Srilanka, What About Art residency in Mumbai, Space Studios residency in Vadodara. He currently works in Delhi.

to take a turtle for a walk will be on view at Kamalnayan Bajaj Art Gallery until 8th February 2020 from 11am to 7pm, except Sundays and public holidays.

Founded in 2009, Space118 provides studios and residencies on a short-term basis to artists, as part of its commitment to supporting emerging art practitioners from all parts of the country and the world. We are looking at a diverse group of artists working in the studios to create a lively, supportive and dynamic working environment. We aim to foster the exchange of ideas and experiences amongst artists, who work across different fields of art. The artists are encouraged to develop their work at their own pace and interpret the studio term from their own perspective.

It is a great feeling to announce the completion of 10 years of Space118 – a venue that has been home to over 300 artists from all over the world. In addition, the Space has organised over 65 art-related workshops and 30 public events. Along the years, what started as only a studio space for the artists, turned into a residency space where we supported some folk-art residencies like those of Warli and Kalighat artists like Kalam Patua as well as international residencies in the case of Kooshk residency from Iran, and Conseil des arts et des lettres from Quebec. The Space has encouraged new ideas and documentation. In fact, the neighbourhood too has served as a research repository for Sarovar Zaidi on the Shia Muslims of Byculla, Umerkhadi, Mazagaon and Nagpada; and Ali Akbar Mehta’s extensive photo documentation of the Mazagaon and Byculla area, still reminiscent of its rich Jewish history. Performances of Inder Salim, Shrikant Puranik and Mansi Bhatt at our Open Studio Days, have garnered a lot of interest and we also published a book, ‘Stop making sense’ by Himanshu S. to contribute towards the critical writing in the arts.

Back to Top
WordPress Lightbox
MENU